Kerala is an incredibly beautiful place, full of green foliage, backwaters, landscapes, and mysteries, which creates a sense of awe and wonder in everyone who visits this place. It is a place that must be visited in one’s lifetime. In the literal sense, Kerala means, ‘the land of coconuts.’

The Legends of Kerala 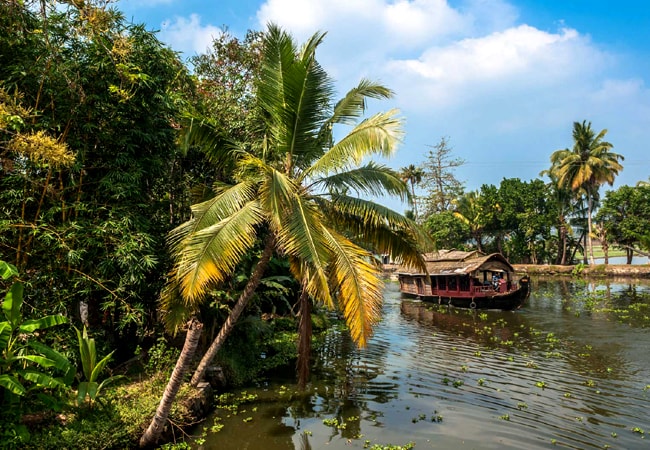 The inception of Kerala is linked intricately by the legend of Parasurama – The Axe Wielder. Parasurama, as proclaimed in the legends, is an incarnation of the Lord Mahavishnu, who had waged several wars against the Kshatriyas to gain vengeance for his father’s death. However, following this barbaric act of his, there came a time of gnawing distress from his sense of guilt for such wrongdoings and hence performed penance to show his repentance. In an act of reconciliation, this venerable man threw his powerful Axe into the distant ocean from atop the Gokarna Mountain, which fell onto the surface of Kanyakumari. The waves drew back to reveal the surface of the land from Gokarna to Kanyakumari, which was donated by him to the Brahmins (or Namboothiris) to free himself from sins. This piece of land later came to be manifested as the Kerala state.

After a number of battles fought during the ancient periods as well as during the British rule, around 1st of July in 1949, the Travancore and Cochin states were united to bring into existence the Travancore-Cochin State, which further went on to be known as the Kerala state, precisely on 1st of November, 1956.

Most Important Festival of Kerala – Onam

Onam though is celebrated as an annual harvest festival by Keralites, has a story from the past. The story goes like this………

King Mahabali, who once ruled Kerala, was a very ambitious person while being helpful, openhanded, discreet, and wise at the same time. The people of Kerala were very happy and prosperous during this King’s reign and his kingdom seemed to be flourishing well. However, this growth in the King’s fame and popularity was not looked upon well by the divine Gods, who began to feel uncertain about their state of supreme power. Perceiving this, the mother of Gods, Aditi, approaches Lord Vishnu for help. Lord Vishnu takes it upon himself to restrain the king’s growing popularity by taking the shape of a dwarf named Vamana. Vamana, in the guise of a beggar, goes to King Mahabali and asks for a boon – the ownership of land that he can cover in three treads – to which the King agrees, for he was liberal natured. As Vamana takes his first stride, he grows into a gigantic form that by two strides he covers the entire surface of the earth and the skies as well. When asked where his third step could be placed, the King bows with folded hands before him, realizing that this was no ordinary person. Lord Vishnu positions his third stride over the King’s head and pushes him beneath the earth’s surface, not before granting him a boon, which is – allowing the King to visit his kingdom once in a year. It is this day of the King’s visit that is celebrated as the Onam festival in Kerala year after year.

Considered to be one of the Top Ten Paradises on Earth, this elongated small strip of land is situated in the southernmost tip of the Indian continent. On its north-east side is situated the Karnataka State; on its east is the Tamil Nadu State; and on the west, it is surrounded by the Arabian Sea. From its North to South runs the Western Ghats that delineates Kerala from the rest of the country. There is also a narrow strip of coastal plain running from North to South along the Arabian Sea. Kerala forms only 1.2% of the country’s land area, with the state’s total land area determined to be around 38,863 sq: km; 580 km in length, and 30.130 km in breadth. This state is further divided into – the lowlands comprising of coastal regions, the fertile midlands, and then the highlands. Surprisingly, the lowlands have the highest population density, probably because of fishing and fertile sandy soils considered apt for coconut cultivation; and the highlands with the least population because of their natural tropical forests. However, these forest areas are slowly paving the way for rubber, tea, and coffee plantations.

Kerala state is territorially divided into 14 districts, and down below is a complete list of this.

There are several Gram Panchayat and Municipal Authorities that aid the Kerala government in controlling local areas. Otherwise, the Kerala Council of Ministers constitutes 19 members which also includes the Chief Minister, who currently is Sri. Oommen Chandy. Though the Governor appointed by the Indian President has executive powers of the state, the executions are in reality carried out by the Chief Minister itself along with his Council of Ministers. This Council of Ministers is elected by the general public and is generally made up of members from the ruling party. The present Kerala Governor is Shri. Nikhil Kumar.

The Kerala Government is divided into

Kerala has witnessed a notable growth in its economic system which has, in turn, affected the state’s prosperity positively. Approximately half of Kerala’s population is engaged in the cultivation and production of crops like rice, paddy, coconut, rubber, pepper, cashew nuts, tea, and coffee. Other than this, a variety of fruits and vegetables are also grown here.

Employment to a huge crowd in rural areas comes from livestock and animal husbandry, concerned with cattle breeding and their healthcare management, and also with the production and care of domestic animals.

With the state being rich in its flora and fauna, and with the ample quantity and varieties of herbal medicinal plants available here, Ayurveda – a traditional medicinal system founded thousands of years ago in India – is flourishing here in Kerala.

To a large extent, the state’s economic growth also comes from the fishing establishments situated all over Kerala, with huge quantities of freshwater and marine fish varieties yielded every year.

Other than these, the industrial growth, mainly dealing with textiles, spices, and electronic goods; and IT software sectors, e-commerce, and e-business industries have contributed to the rapidly growing economy of the state.

Kerala is linked excellently well with the rest of the country by well-connected roads and railroads, as well as by air routes. As one enters their destination, there are luxurious coaches, taxi services, and ferries available to take them to their place of stay. Most tourist operators provide budget traveling options for those interested in making an extensive tour around the state.

‘God’s Own Country is the official logo of Kerala Tourism, and this state has been gaining immense popularity lately as a must-see tourist destination. Kerala has magnificently impressive historical monuments, lush green landscapes, hill stations, wildlife sanctuaries and resorts, backwaters and beaches, and wellness Ayurveda recourses dotting the state that has attracted tourists all year round and managed to give tourism an industry status.

In the year 1991, Kerala was announced as a 100% literate state and now continues to stand first among other Indian states with a literacy rate of around 90% or even above. Education was given top priority by the Kerala government with some major support coming from the central government, and both jointly have come up with various educational programs and schemes facilitating even the poor with good quality education. Currently, the aim is to provide higher education attuned to the changing trends in the field of study, focusing on providing students with global employment opportunities.

This beautiful state is also blessed with pleasant climatic conditions, which is something of a surprise considering the fact that it is rather close to the equator when compared to other Indian states. This is because the state is protected partly by the Western Ghats from the hot and arid winds moving in from the North, and is mostly surrounded by the sea on its west side. Though the weather remains pleasantly cool throughout the year, summers are rather hot and humid and monsoons last for a longer period, unlike other Indian states. The monsoons can be categorized into two – the southwest monsoons and the northeast monsoons.

South-West Monsoons – This is the essential rainy season that commences around the end of May and lasts up to the month of September. During this period rains are plentiful, with the Western Ghats receiving the highest amount of rains.

North-East Monsoons – This season starts from the month of October and continues until the month of December. Hence, one could report that Kerala receives rain for approximately six months in a year; however, this is a place that has its own compelling attractiveness during the monsoons, which needs to be discovered individually.

Customs and Art of Kerala

Celebrating Vishu is a long-established practice in Kerala, which marks a new beginning. This particular day falls in the month of April, precisely on the 14th of April, announcing the beginning of a New Year for the people of Kerala. There is a list of items that should be seen first thing in the dawn of this day, known as Vishukani. These are – the ancient leaf scripts, fresh clothes, gold ornaments, a heap of paddy, halved coconut and jackfruit, yellow cucumber, and flowers of a particular tree called Cassia fistula (Konnapoo), all neatly arranged in a big pot or Uruli (traditionally made of bell metal). Behind the pot is to be kept an idol of Lord Krishna, two lighted lamps on either side of the deity, and a small mirror into which the person should look when brought blindfolded in front of this Vishukani. This is then followed by taking blessings from elders, who normally will distribute cash or gifts to the young ones in the belief that the year will help them see an increase in their economic well-being. Crackers are then burst with mirth and traditional festive meals prepared to feast on.

Of course, there are various other customs followed by different religious sects, with rituals performed at every stage in their life indicative of significant worth, for instance – marriage, the birth of a child, and loss of an individual’s life.

Likewise, Kerala is multifarious in its art forms. Several plays and dramas are performed in temple sanctities and depicted through traditional songs and dance forms. The famous dance forms of Kerala are Kathakali – traditional dance drama; Mohiniyattam – a dance form performed only by women in temples; Velakali – a martial dance, and many other lesser-known art-based recreational performances like Oppana, Pulikali (tiger dance), Theyyam, etc. Another popular art form is the Kalaripayattu, which is again a martial art form that was widely used during physical combat in ancient wars and battles.

Another popular interest is the state’s unique cuisine. Most of Kerala’s dishes require the use of coconuts, either in their grated form, chopped, ground, or have their milk extracted to thicken gravies and porridges. Similarly, almost all dishes from Kerala are cooked in coconut oil.

Toddy fermented rice batter results in soft, aromatic fluffy pancakes called ‘Appams’; slightly moistened rice flour, layered with coconut gratings and steamed in long, hollow bamboo stems gives rise to the traditional breakfast called ‘Puttu’. Then, there are the vegetable varieties like Avial, Olan, Pulissery, Thoran, Pachadi, etc., which form a part of the traditional Kerala ‘Sadhya’. Moreover, since the state is surrounded by the sea on one side, seafood is more popularly eaten across the state. Kerala dishes are considered easy to be cooked, simple, and healthy – something that should be taken full advantage of.

Famous Personalities Having a Kerala Origin

Kerala nicknamed God's Own Country is a significant tourist destination in South India, ideal for leisure, romantic holidays as well as nature tours. This south Indian destination is known for its realm of nature and the state is immensely gifted with many wonderful attractions that every year, millions of tourists National and International visit to relax and spend a glorious time in the cozy inv...