Temples in India play a vital role in every mortal’s life. India, the land of pilgrimages, holy saints, devotees, and religious cults attracts tourists from all over the world. Pilgrims and tourists come to India exclusively for Hindu temple tours in search of harmony and spirituality.

In the ancient era, royal kings and common people would worship Gods and goddesses and remain devoted to the whole of their lives. To please the Gods, they built magnificent temples sculpted and crafted with numerous deity images. These entire Hindu temples portray the devotions of rulers during their rule. All the Hindus believe that Gods come and stay in these Hindu temples.

All these temples in India are dedicated to different deities. Lord Vishnu, Lord Shiva, Lord Hanuman, Lord Krishna, Lord Surya (Sun God) are some names of Hindu Gods for whom these Hindu temples are built. All these temples portray religious devotion but also reveal architectural splendor. Craftsmen built these temples with their skilled hands and decorated the images of gods and goddesses. Few of these temples in India are built inside caves and are a true example of sparkling and stunning artistry. Every single minute aspect of craftsmanship is a mix of spiritual as well as architectural grace. The history and name of all these temples can be traced in the manuscripts. Sun Temple, Ajanta, Ellora, Brihadeshwara Temple are a few of them. Though with changing times, Hindus have adopted newer technology in building these Hindu Temples the basic motto of spreading spirituality remains the same.

Across India, Hindu temples are built in huge numbers and the list is nearly endless. Temples in India have become a favorite spot and people from all over the world come here for a Hindu Temple tour for once in their lifetime. Hindus treat all these temples as an important wealth of the nation and culture.

Be it any religion, temples in India play a vital role in every human’s life. A tour to these temples is a great way to attain salvation and that internal peace which become sometimes difficult to obtain in our past lives. Amongst all this, Jain temples, built in homage to Jainism religion are also equally important and have huge religious significance attached with them.

If wanting to go on a Jain temple tour, check out this list of popular temples in India dedicated thoroughly to Jainism Religion. 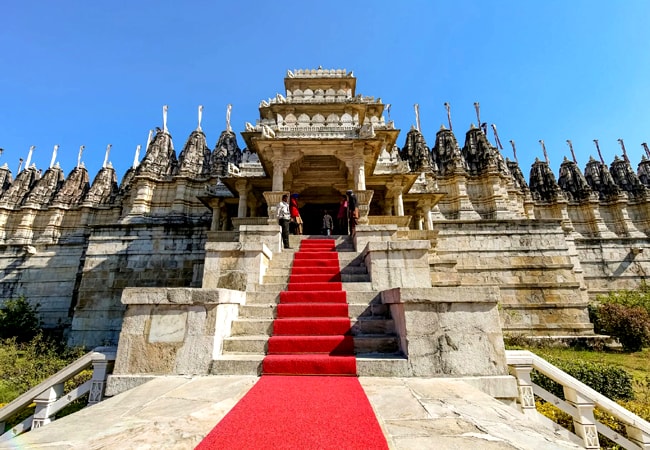 Dilwara Jain temples are situated in the Rajasthan state of India. These temples are an important part of any Jain temple tour. The majestic temples were constructed somewhere between the 11th century to 13th centuries. The temples portray the magnificent and rich architectural splendor of the country. Amongst all five Jain temples, the tallest temple is Chaumukha Temple. The temple is made out of white marble and somewhere can be compared to the white beauty of the Taj Mahal. The Dilwara temples are located about 205 km from Mount Abu. The temples can be reached easily via any means of transport.

The temple is also located in Rajasthan and plays a major role in any Jain temple tour. Situated in a remote region of Aravali hills, it was constructed somewhere in the 15th century AD. It’s said that the locales of the town Falns donated about 90 kg of gold for the decorations of these Jain temples.

This Jain temple was built to pay homage to Lord Rikhabdev, the very first Tirthankara of Jainism. The temple is in Udaipur, Rajasthan. The best time to visit it is from March to April.

Your Jain temple tour is truly incomplete without a visit to Pavapuri Tirth, situated 90 kilometers from Patna, Bihar. It is here where Lord Mahavira took his last breath. The temple plays an important role in every Jain’s life.

The basic architecture of north India temples is a room or Garbhagriha style where the idol of the main God is placed. Almost all the temples are reached by a flight of few or a large number of steps and are mostly built on a platform. North Indian temple tour takes you to places that are known to offer that endless harmony for ages.

Some of the popular North India temples are as follows:

All these temples are dedicated to various gods and goddesses of different religions. Moreover, they all play a significant role in everyone’s life who believes in Supreme Almighty and His miracles. That is the reason which gave birth to the north India temple tour. Pilgrims from all over the world plan visit to these temples during their north India tour.

The culture of India can be traced back to ages ago which is clear due to the presence of innumerable ancient temples that dot the entire nation. These places have been worshipped for a very long time and have attracted tourists from all over the world. These temples are well renowned for their significance and historical importance. If you are looking to explore the charming aura of India then yo...

An Ultimate Guide to Chardham Yatra by Helicopter

The spiritually evoking Char Dham Yatra keeps leveling up. What used to seem like an impossible task for many Indians centuries ago, has now turned into a journey that is comfortable and very smooth. One of the most revolutionary steps in making Char Dham more comf...

Ferry in Chilika Lake and Sri Jagannath Temple in Malad

As the sun glows above the sky and the birds fly beneath the clouds, we boarded a ferry in Chilka Lake to accomplish our wish of completing our coastal line road trip through Orissa. A few fishermen were trying their luck with their nets in the lake while our ferry...

Kerala nicknamed God's Own Country is a significant tourist destination in South India, ideal for leisure, romantic holidays as well as nature tours. This south Indian destination is known for its realm of nature and the state is immensely gifted with many wonderfu...